Kanchenjunga at Tiger Hill, Darjeeling - a celebration to share
https://youtu.be/Gj0tv9tcui8

Near Darjeeling is a short and otherwise unremarkable hill. It is possible to walk up to the summit or hire a jeep to get there. Some even spend the night on or near this elevated place,  so as to catch the early morning sunrays on Khanjenjunga.

Tiger Hill offers a spectacular view of Kanchenjunga, that third highest summit on earth and peoples from far and near assemble to witness the sun strike, not just that lofty summit, but also the dawn awakening of the Himalayas. Due to the elevation of Kanchenjunga and the curvature of the earth, the sun touches here before lighting the lower Himalaya summits to the east. Residents of the area had long held this belief of first light to be true for thousands of years before the first man stood on the summit of Kanchenjunga(actually six metres below the summit in deference to local sentiments) and realized it was true.

Therefore, you have a magic place and a magic moment and an experience best shared. The dawn at Tiger Hill takes on a carnival atmosphere. There are men banging drums and those playing pipes. First, the cold wind stirs chill air and the many prayer flags begin to flutter then the crowd grows almost silent before the moment. Till then the darkness of 4 am is broken by cries of "Coffee" for those braving the chill.  The rising sun tips the summit with gold then blushes rose, the day has begun. Manmade music rises again as those around begin to dance, chant and worship. There are smiles on all the faces and the cold morning long forgotten. 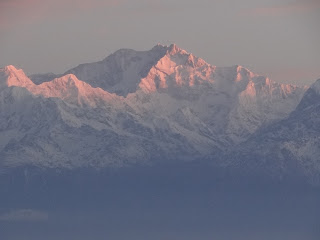 The red panda is a small arboreal mammal found in the forests of India, Nepal, Bhutan and the northern mountains of Myanmar and southern China. ... In India, it is found in Sikkim, western Arunachal Pradesh, Darjeeling district of West Bengal and parts of Meghalaya. It is also the state animal of Sikkim.
- WWF India

Meeting the red panda in person, remains another beautiful memory of my visit to Darjeeling.  Padmaja Naidu Himalayan Zoological Park also known as Darjeeling zoo has successful captive breeding programs of Red Pandas in India.  The Darjeeling Zoological Park, West Bengal is well maintained, has many animals in cages and some in open areas with moats all around.  The red panda has pride of place with maximum area allotted and obviously is a big draw. 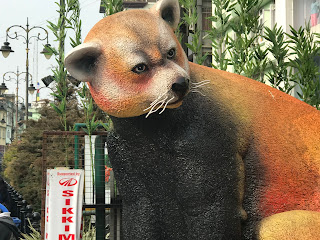