Mirza Asadullah Khan Ghalib, is the most well known Urdu poet of the Indian sub-continent. His ghazals and poems reflected the difficult times he lived in-the 1857 revolution, the transition of power from Mughal empire to the British empire.

He was one of the celebrated residents of the walled city.

The heritage walk, led by Ms. Surekha Narayan began at the Town Hall in Chandni Chowk and the first stop was Ghalib's haveli, acquired by the Delhi Government in 1999 and restored as a museum to Ghalib. 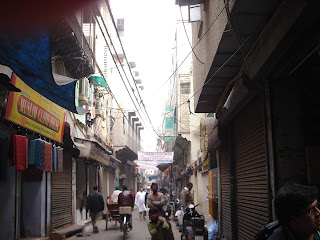 Street where Ghalib lived during the 19th century.

The walkers passed through Ballimaran bazaar and witnessed Mahal Sara, the haveli belonging to Umrao Begum, Ghalib's wife. It has now been converted into Rabea Girls' School.

The walk culminated at Rabea Girls' School where the students enacted a "mushaira" in the "durbar" of Bahadur Shah Zafar.

Watch a slide show of photographs taken during the walk, by clicking on the picture below.

Watch a short movie clip from the mushaira by clicking below

I visited Kashmir for the first time in August 2006. The tender beauty of Dal lake in the morning, the cheerful Lidder river en route to Pahalgam and the majestic fir trees in Gulmarg- add to it a very hospitable people, and one wonders if Kashmir is cursed for possessing too much beauty. The presence of army at every 100 meters or so in Srinagar, too many restricted areas and the dead silence of the roads after nine pm or so, tells you things are not normal in Srinagar. 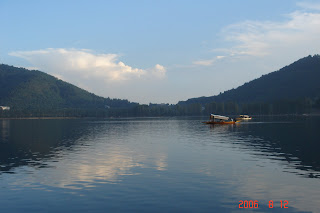 Our tour organizer, http://www.indianwildlifeclub.com/EcoTourism/Discovery-Journeys.aspx made sure that we could make the most of our trip by organizing stay in the elegant but grand houseboat called “ Lotus Retreat” and arranging for all transport in and around Srinagar, taking care of all permissions etc. 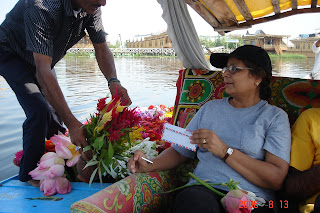 Seeing how silk is extracted from silk worms in a traditional factory, catching rainbow trout in a government sponsored center at Pahalgam, seeing the grey langurs in Dachigam, the laughter of the Lidder-these are memories I will cherish for ever.

See a side show of my stills at 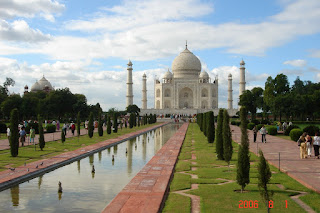 The Taj Mahal is considered the finest example of Mughal architecture. This marble edifice is a mausoleum located in Agra, India, built by Mughal Emperor Shah Jahan in memory of his favorite wife, Mumtaz Mahal.
In 1983, the Taj Mahal became a UNESCO World Heritage Site.
Building of the Taj began around 1632 and was completed around 1653, and employed thousands of artisans and craftsmen.

"The sight of this mansion creates sorrowing sighs;
And the sun and the moon shed tears from their eyes.
In this world this edifice has been made;
To display thereby the creator's glory."

Click below for a slideshow on the Taj Mahal

Lodhi Gardens in New Delhi was landscaped in 1930 by Lady Wellington. The park is a favourite with morning walkers and yoga enthusiasts. The park also houses heritage monuments of the Lodhi era, remnants of the decorated walls of these structures taking us to a period in history when rulers spent money and labour in creating tombs and mosques. Intach ( Indian National Trust for Art and Cultural Hertage) organizes heritage walks in the Gardens regularly.

The synthesis of the modern and the traditional that S.Korea has achieved is remarkable. S. Korea comes through as a Society which is truly at peace with its tradition, culture and modernity.


South Korea as a country has many similarities with India and their fast transformation from a developing country to a developed country is inspiring.


Here are some still photographs from South Korea

Seoul (South Korea) hosted World Cup Football in 2002. These pictures were taken in Seoul during the series which was won by Brazil with S.Korea coming in fourth place.

My sons Sumit and Sushant are happy to witness the world cup football. 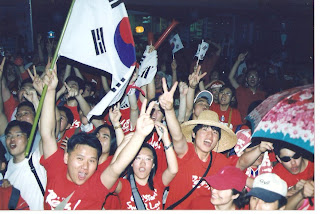 
South Korea as a country has many similarities with India and their fast transformation from a developing country to a developed country is inspiring.

See clips from the film at youtube by clicking here

I visited Barcelona in 2005, a short three day visit. The city is mesmerising for a tourist. The creativity of the place seems to get into you in more ways than one. There is much more to the place than what I have captured in my camera.

Those of us familiar with the idea of "Himalayas" as the abode of "Shiva" would be pleasantly surprised when you reach "Top of Europe" Jungfrau. The head of a young woman, etched by nature on permanent snow at a height of nearly 4000 meters, bears a striking resemblance to Lord Shiva, with his tresses and the third eye.

The Jungfrau (maiden/virgin in German) is the highest peak located in the Bernese Oberland region of Swiss Alps. Accessible by train, hotels/restaurants, an Ice Palace,an Observatory are some of the attractions at Jungfrau.


Here is a slideshow of impressions from our visit

Most of us have seen Schilthorn -in the Bond movie "On her majesty's secret service". Here is what it feels like to be there in real.

Schilthorn is a 2970 meter high summit in the Bernese Alps in Switzerland. The panoramic views from this summit, of the Jungfrau, Thun, Black forest and Mont Blanc(in clear weather) makes this mountain a photographer's delight.
Some of our best photographs are there at the site wildscapes.net. Have a look at

Here is the slideshow of my digital impressions about the place.

Trummelbach is the place in Switzerland where you can watch a waterfall inside a mountain!

20 km from Interlaken, Switzerland, is 'Trummelbach' where you can watch the glacier waterfalls finding their way through the mountains before jumping out of the mountain heights as a waterfall.

The Swiss have built a tunnel lift inside the mountain which carries you to the top where the glacier melts of Eiger, Monk and Jungfrau enter the mountain crevices. The well illuminated stairways with landings constructed at vantage points, enable the tourist to watch the path of the waterfall inside the mountain. The roar of 20,000 litres of water per second carrying boulder debris takes one close to raw nature.


Here are some video clips of the glacier waterfall

Rural Switzerland, recreated for tourists in Ballenberg, is a must visit for all Indians. It helps us appreciate our own rural crafts and artifacts even more!

At Ballenberg, in Switzerland, about 100 rural houses have been erected as architectural and socio-historical witnesses of everyday life and rural culture of past times. Ballenberg is a living village with farmhouse gardens, meadows and 250 odd farm animals.

Interlaken (meaning between lakes) is a popular tourist destination in Switzerland. The town lies in the foothills of the Alps flanked by the lakes of Thun and Brienz.

Making Interlaken as the base, one can visit many places nearby. But Interlaken itself has a lot to offer-as the following slideshow shows.

Shashi could photograph some breathtaking views of the Alps at Jungfrau and Schilthorn. Some of these can be viewed at

Here are a few slides taken at interlaken ( Adults only! please)

Switzerland is a beautiful country with beautiful people.

To absorb the beauty of the Swiss countryside, a trek through Beatenberg is ideal. This countryside on the banks of Thun lake, is charming and offers various adventure sports as well.

If you are a wildlife enthusiast, the higher reaches of Beatenberg is home to the rare ibex.

A few freezes from my experience of Beatenberg are given below.

Duomo is the main cathedral in Milan, Italy. This cathedral was five centuries in the making, built from the late 14th well into the 19th century. There is a very evident mixture of style in the architecure and facade.

A slide show of this masterpiece cathedral in Milan which is known the world over.

Michaelangelo's last and unfinished work can be found in this museum. A museum showcasing the works of many unknown sculptors as well, the Milano museum unfolds the history of art through many centuries.

Sforzesco Castle which served as ducal residence and army barrack during the 15th century is now tranformed into a museum centre.

There is no ban on photography inside the museum and guides provide you with detailed pamphlets ( photocopies) of each exhibit. The photocopies are thanks to an initiative by the rotary Club of Milano.

Here is a slideshow of some of the pieces which I found interesting.

Many of the historical cities of the world would not be as attractive and captivating but for the green areas and the flora of the country, which is maintained and preserved with great care.

While in Austria, my camera took special note of the beautiful green areas. Here is a slideshow of what captivated me.

There are a number of excellent hiking trails that run through the Schonbrunn palace grounds. Another green area is the Stadtpark.

The vegetation in Stadtpark is thick and lush throughout the year. This natural setting in the centre of Vienna Austria provides a glimpse of what Vienna was like prior to development.

My most memorable event in Vienna, capital of Austria, was a visit to the Schonbrunn Palace. Amidst the opulence of the palace rooms lay the death mask of a young man clutching his pet bird, a crested lark. This bird lover was the son of Napolean who conquered Vienna twice. The only legitimate son of Napolean with Marie Louise.

Sadly I could not take a photograph as photography is prohibited inside the palace.

Vienna has, however, a lot to offer and the slide show below is but a teaser!

I visited Villach, Austria in Sep 2006 to present a paper at the ICL(Interactive Computer-aided Learning) conference organized by the Carinthia Tech Institute. These are the memories I cherish from the conference. Villach is a small town in Austria situated on the banks of the Drau river. My impressions at Villach at the link

The Peggy Guggenheim collection, the open air installations at Lido, art and photoexhibitions at every nook and corner- that is Venice for you.

'Getto' in Venetian dialect signifies the casting of molten bronze in a foundry. In 1516, the Senate of the Venetian Republic decreed that the Jewish community should be confined within the restricted bounds of a single island, which had formerly housed such foundries. Here are my impressions about the ghetto in Venice

Being an animal lover myself, I enjoy photographing pets on my travels. Here are quite a few I noticed in Venice. Pets are part of the way of life in Venice. A major part of Venice is out of bounds for cars and one finds that pets accompany their owners going about their daily life.

Here is the slideshow
http://travelphotolog.wildbytes.in/#7.0

Venice is famous for its colourful glasswork. In the 13th century, all glassworks in Venice were transferred to Murano, an island not far from the City. The blazing furnaces, open fires and vats of molten glass were perceived as a threat to the City and hence the transfer.
Here is a photostory of how I experienced Murano glass.

Venice, which rests on millions of wooden piles pounded into marshy ground, has sunk by about seven centimetres a century for the past 1,000 years.
(According to a study done in 2000 and reported by CNN)
The earth's natural underground water supplies acted as a cushion that helped slow the city's sinking.

Venice and its lagoon was added to UNESCO’s World Heritage list in 1987.


The Italian government is spending 4.5bn euro (£2.9bn) on a controversial project to build floodgates across the entrance to the lagoon in which the city stands in an effort to keep the sea at bay.

Venice always makes us feel it is there for each one of us alone; the lenses of a thousand photographers will never succeed in capturing exactly what we see....