Visiting the ski slopes of Auli 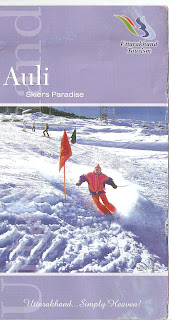 Given above is the poster with which I boarded the train to Haridwar from Delhi, en route to JoshiMath by road. "Auli has the best slopes in the world facilitating snow skiing during winters beginning January to the end of March." My friend and I were looking forward to seeing the International skiing festival organized in February every year. 'Snowfall predicted for 24 Feb 2009, temperatures expected to fall below -12 degrees' my brother looked up some weather forecast on the Internet and warned me before I boarded the train.

The road journey was hot-the sun became hotter as we climbed up. Joshimath: Local people informed us that there has been no snowfall in Joshimath this year, unlike last year. But they carefully added that weather in these parts is always unpredictable. Auli is sure to have snow. We hurried to make it to the cable car which will lift us to Auli, at 10,000 feet. "No cable car today, we were informed at the cable car base; Today is maintenance day after a three day strike by workers". Sumo drivers appeared from somewhere offering to drive the stranded passengers of Cliiftop Club. Our own car driver backed out saying the 14 km drive is too risky for his car. Snow makes roads slippery, he averred.

As we drove up through steep, dusty and winding roads, the peaks Nanda Devi, Kamet, Mana parbat and Dronagiri began to look closer and closer. The landscape looks a bit like Leh with brown rocks all around -Leh in summer that is, my friend observed. The snow tipped Nanda Devi was tantalizing, I forgot we had come to see snow and the skiing festival.

ClifftopClub did not look like the pictures on the web- The building was there. But where is the snow and the Deodar trees around? Instead there were huge bulldozers working up the roads in dusty clouds, removing the last bit of vegetation which clung desperately to the slopes.

Then the realization dawned. Auli has had just one snowfall this year. The January snow fall did not last enough for snow to harden. In winter 2008 Auli had 3-4 feet snow compared to the usual 8 feet or so every year. The writing was on the wall and Government authorities moved in with an ambitious plan to create artificial snow slopes. The bulldozers and mules around were busy getting the slopes ready for December 2009, for the South Asian Skii festival.

When it snowed on 24 February for about ten minutes, the bulldozers were silent just for a few minutes till the flakes melted away and the fierce sun dried the slopes again.

Global warming was here and too close. We were in for a different kind of holiday!
I have divided this photo blog into four parts

The mountain and the snow

When you reach the lap of Nanda Devi, height 25,643 feet and second only to the Everest, you are overwhelmed. 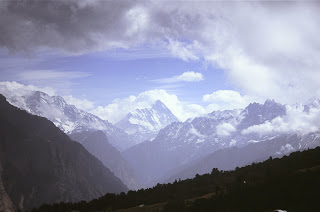 The nearest mountain ranges of Dronagiri seem bare, stripped of snow, in the peak of winter. 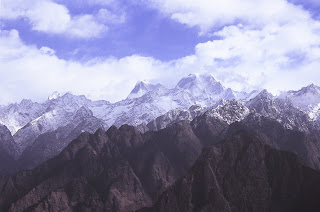 The Brahmkamal peak with spikes resembling the actual flower is an instant hit. 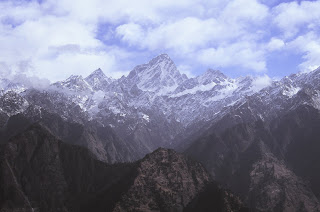 So is Hathi Ghoda Palki with the glaciers clearly visible. But we came here to see and feel snow. Where are the snowflakes? On 24 February, it snowed for nearly fifteen minutes. Our new friend from the hotel wrote in her diary

" Snowflakes-some slow, some fast, some feisty doing a jig before succumbing to gravity...."

Honeymooning couples danced on the terrace in the snow 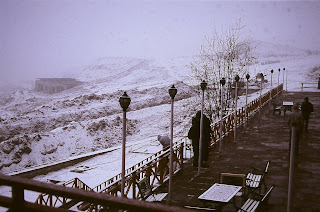 Sunrise on Nanda Devi-a picture I laboured to get right on a cold morning at 6.30 am 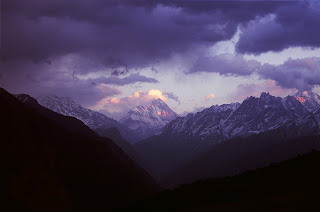 The trees and plants one sees above 10,000 feet surprise you with their sturdiness. The trees look majestic and protective. The sturdy bushes and grass support your heels while climbing up. Pretty flowers smile at you lighting up unknown corners. Trekking on foot is the best way to appreciate the terrain and the flora.

Here is a Basant tree with Nanda Devi in the background. The tree is having flower buds in February. Normally at this time it will be covered with snow. 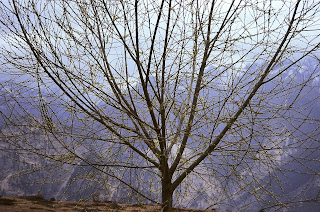 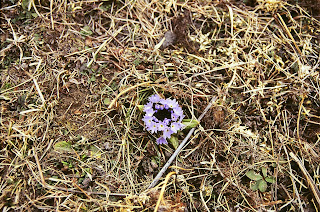 Blooming in times of global warming 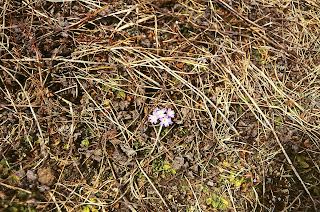 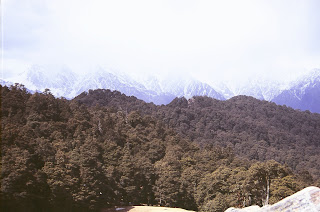 The ‘Nahar Bush’ has lovely smelling leaves and is an insect repellent. Here is Rakesh, our guide with the Nahar Bush 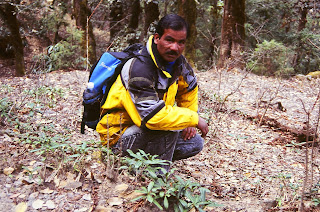 We are fascinated by the pink white flowers of Basnt tree. Here is a pic of me holding a bunch in my hand. 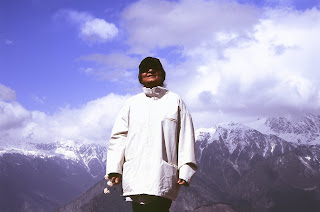 We found beautiful flowering trees lining the roads on our way back to Joshimath. We wanted to know the name of the tree. Some Bank officials whom we met, who were posted in the area, could not help. Nor could the hotel owner at the hotel where we had lunch. The most common local tree had no name!

I had seen the same flowers in Mandal (on the way to Kedarnath) a few years back. Here is a photo of the tree in Mandal. The flowers resemble cherry blossoms.

But we saw ‘bottle brushes’ and ‘gulmohars’ being planted on the roadside by PWD (or Forest dept) to make up for trees cut down during widening of roads. The question which came to us was, why are we not propagating the local trees?

The most majestic of all the trees in Auli? The Golden Oak, no doubt. Two hundred of these more than hundred year old trees, are slated to be mowed down for the ski slope.

The treks
R.R Point
Absence of snow at Auli had a silver lining to it. We could go for small treks around the place with our normal trekking shoes. The easiest trek was just 1.5 km, to R.R Point, an army communication center. 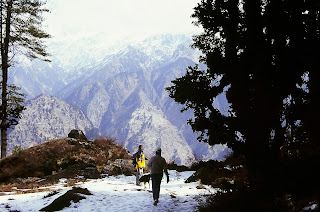 From R.R point one could see the Hemkunt range and the Valley of flowers enveloped in clouds far away. Immediately below is a village, which is shaped like the map of India. 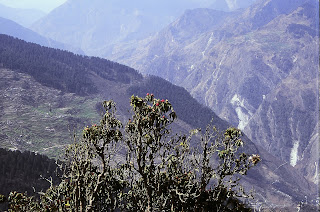 Many ventured on this trek as Gorson meadow had a patch of hard snow where one could get basic lessons in skiing.

Gorson from the hotel 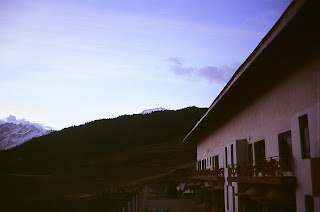 Bharati, a black dog and Sheru a brown dog faithfully accompanied us on all treks. In the pic below, Sheru waits patiently for the tekkers to catch up while Bharati is following us close on the heels. The feeling of oneness with nature one experiences on treks is reinforced by these two best friends of man. 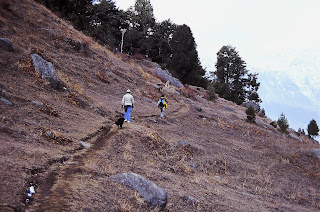 This trek is indeed beautiful. A temple called “Padiyar Devta’greets you half way up the climb. 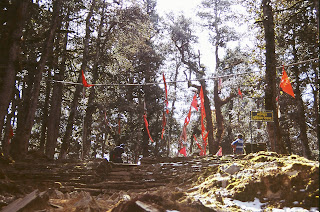 As we near Gorson point, one is within reach of the snow clad peaks. 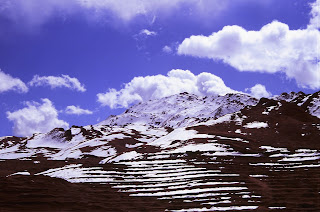 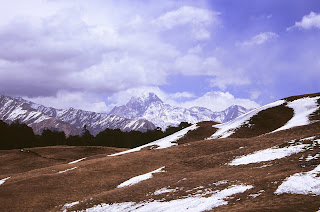 This trek through steep golden oak forest is rated as difficult-mainly because the climb is continiuosly steep without plain resting spots. It is made tougher these days since one has to climb up the ski slopes- now being shorn of grasses and bushes thanks to the bull dozer razing through it many times to create the artificial ski slope. 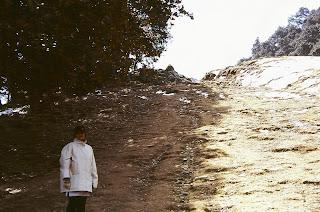 As we neared the golden oak trees, we saw some with huge cavernous holes ( Black bears sleep there, our guide informed). Fresh diggings in the mud were attributed to wild boar. Distant trees moved with the weight of animals or birds flying about-monkeys or Himalyan monals? Here is the lichen with which monals make nests on trees, our guide showed a clump on the ground 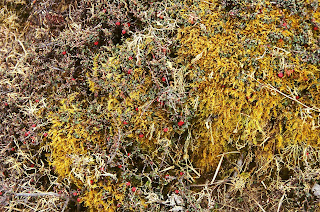 As we moved down I collected a few branches of golden oak leaves. The trees marked with the "death warrants" continue to haunt me when I look at these leaves dried but golden, weeping silently in my vase. 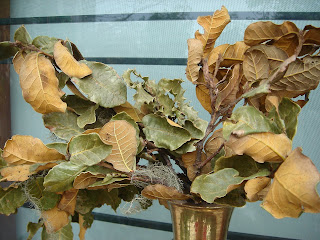 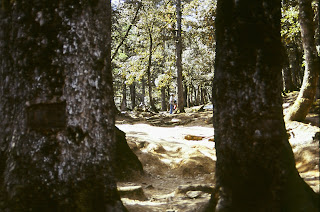 Just completed! Swimming pool for storing water which will be turned to ice and then sprayed over the slopes. 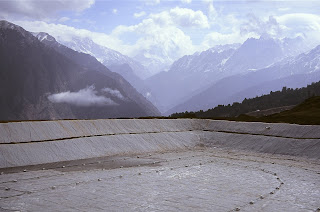 The ski slope and swimming pool for snow in perspective 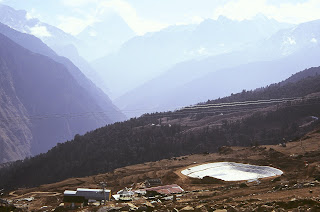 Bull dozers and men at work 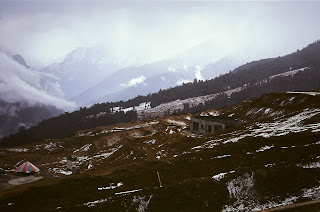 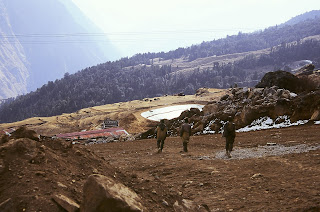 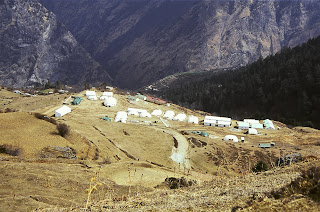 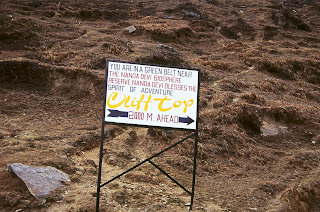